Museum displays a collection of over three thousand pieces from Italy and abroad. Among these: Sicilian puppets, Japanese Bunraku puppets, and shadows from the Indonesian Wayang Kulit and the Cambodian Sbek Thom, declared World Heritage, and figures made by contemporary artists such as Kantor, Baj and Guttuso. Inside, a theater where Opera puppet shows, seminars and video shows take place.


Discover Antonio Pasqualino's renowned puppetry collection of over three thousand pieces from Italy and abroad. You'll find Sicilian marionettes (“pupi”), Japanese Bunraku puppets, and figures made by contemporary artists such as Enrico Baj, Renato Guttuso, and Polish director Tadeusz Kantor. You'll also find many shadow theater puppets from the Indonesian Wayang Kulit and Wayang Golek traditions, as well as from the Cambodian Sbek Thom traditions, both of them declared “Masterpiece of Oral and Intangible Heritage of Humanity World Heritage” by the UNESCO. A theater where “Opera dei Pupi” puppet shows, seminars, and video showings take place is located on the top floor. 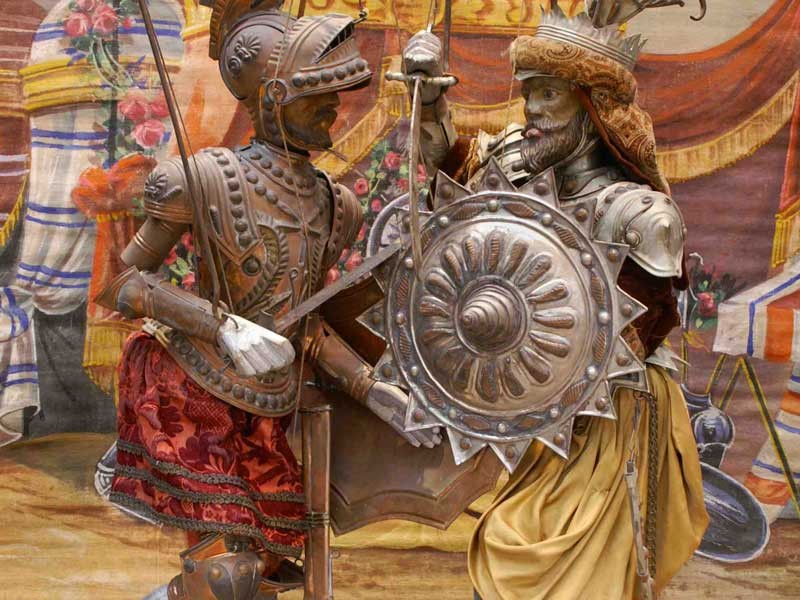 The history of the International Puppet Museum is inextricably linked to its founder, Antonio Pasqualino, who died in 1995. Antonio Pasqualino was an internationally renowned surgeon, an eminent anthropologist, and a student of history and folk traditions of his native Sicily. By choosing the Sicilian marionette tradition of the “Opera dei Pupi“ as his focal point of interest, Pasqualino devoted his research to a theatrical form that declined during the second half of the twentieth century. The “Opera dei Pupi” tells the epic stories of Medieval chivalric literature as well as Renaissance poetry, as well the lives of saints and famous bandits, with texts often written by masters of Italian literature, such as Ariosto, Boiardo, and Tasso.

Pasqualino co-founded the Association for the Preservation of Folk Traditions in 1965 and began his collection, together with his wife Janne Vibaek. The couple gathered dramaturgical source material and scripts, the marionettes themselves plus theater furnishings, saving them from destruction and oblivion.

In 1975, Antonio Pasqualino founded the International Puppet Museum in his native Palermo, creating a home for the Pupi marionettes as well as for the large collection of puppetry material from several European countries and the Far East, including France, Spain, Thailand, Burma, Vietnam, and many others.

Since then, the museum has organized a series of initiatives - such as the annual puppetry Festival of Morgana hosting artists from around the world - and cultural exchanges with similar events on the five continents.

When Antonio Pasqualino passed away in 1995, the museum was given his name. It is now located in the former Hôtel de France, a building of great architectural and historical interest in the center of Palermo, just steps from the monumental Piazza Marina. Recently, the little square was named after the founder of the Museum.

The Museum is spread over three floors and houses a number of exhibition spaces, a bookshop, a library, a video and a film library, and a performance space capable of accommodating a large theater program.

The International Museum of Marionettes is a gem among the museums of Sicily, as it preserves and perpetuates a theatrical form the UNESCO declared part of the "Masterpieces of the Oral and Intangible Heritage of Humanity" (in 2001) – the Sicilian “Opera dei Pupi.”

The Museum is a place full of charm, history, and stories, an unusual and precious window onto the history and folk traditions of Sicily – and the world.

HOW TO GET THERE

By foot: from Piazza Marina, take the Salita dell'Intendenza (to the right of Palazzo Steri) and turn to the right at the second street (Vicolo Niscemi). After a few hundred meters, you will find the museum to your right.

By car: Coming from the A29, (ie, from Falcone Borsellino Airport of Punta Raisi): go to Palermo, and once in the town, turn at the roundabout at Corso Calatafimi- Piazza Indipendenza. Take Corso Calatafimi in the direction of Piazza Indipendenza and once there, take Corso Vittorio Emanuele passinf under Porta Nuova. Continue until Piazza Marina. Turn in Piazza Marina, and once arrived to Palazzo Steri, the Salita dell'ntendenza. Turno to the right at the second street. It is advisable to park in Marina Square or at the Foro Umberto Primo.

By bus: from Independence Square, n. 105; from the Central Station (Piazza Giulio Cesare), n. 225. The information provided was found on the AMAT website.
For any changes or to find the route from different starting points, please consult the map of transport at: http://www.amat.pa.it/nuova_rete/mappa_linee_esistenti.pdf or http://www.amat.pa.it/. In this case, click on "Mappa Linee Esistenti" on the right.