Cathedral of Siena and Piccolomini Library

Your Siena Cathedral tickets admit you to one of the most beautiful churches of Christianity, and to the Piccolomini Library with frescoes by Pinturicchio and his school.

Visit the Siena Cathedral, one of the most illustrious and beautiful examples of Romanesque-Gothic architecture in Italy, as well as the magnificent Piccolomini Library with its frescoes by Pinturicchio and his school.

Your ticket gives you access to the Cathedral as well as to the Piccolomini Library.

Built between 1215 and 1263, Siena's Cathedral Santa Maria was partly built by one of the great masters of Gothic architecture, Nicola Pisano, and his son Giovanni. The upper half of the facade was added during Siena's most glorious days, in the 14th century. The Cathedral of Siena is regarded as one of the most beautiful churches of Christendom, and is a UNESCO World Heritage site. Its marble intarsia floor is of particular interest - Giorgio Vasari called it "the most beautiful... largest and most magnificent... that ever was made.”

The Piccolomini Library is a magnificent space within the cathedral complex. It is famous for its fresco cycle depicting the life of cardinal Enea Silvio Piccolomini, who later became Pope Pius II. The frescoes were painted by Pinturicchio, the Umbrian painter Bernardino di Betto and students. The library also holds illuminated choir books and other works of art, truly a treasure chest within a treasure.

Reservations must be made with a minimum of 1-day notice.

HOW TO REACH SIENA:

The marble floor is uncovered from the middle of August until end of October:

> Last admission half an hour before the Cathedral closes.

> Religious services may lead to changes in the opening times. 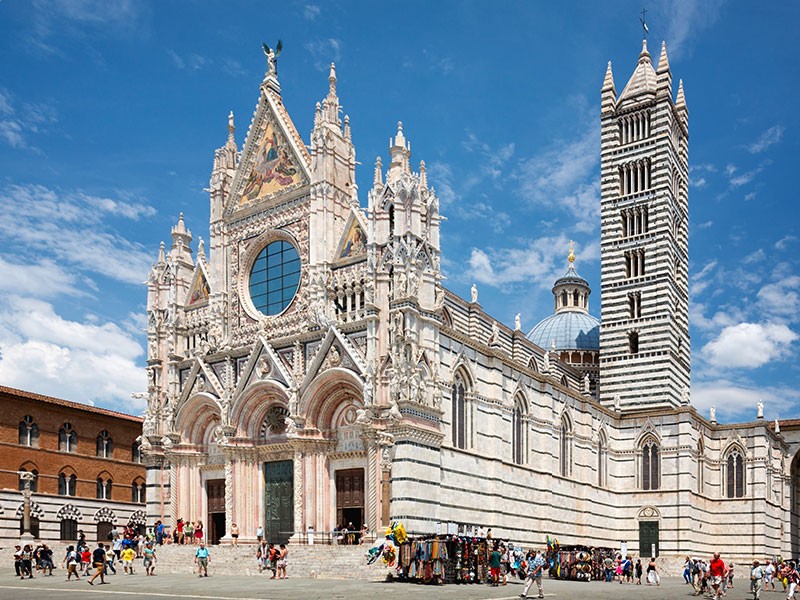 Visit the Siena Cathedral, one of the most illustrious and beautiful examples of Romanesque-Gothic architecture in Italy, as well as the magnificent Piccolomini Library with frescoes by Pinturicchio and his school.

At the heart of the art, history, and tradition of Siena lies the magnificent cathedral of Siena, Santa Maria. It's gleaming mass, which rises on the Piazza del Duomo, constitutes one of the most illustrious examples of Romanesque-Gothic architecture in Italy.

Built between 1215 and 1263, Siena's cathedral Santa Maria was built partly by one of the great masters of Gothic architecture, Nicola Pisano, and his son Giovanni. The upper half of the facade was added during Siena's most glorious days, in the 14th century.

Siena’s wealth and power had grown to such heights that the cathedral was planned to be even bigger than Saint Peter's in Rome. These mighty projects were cut short in 1348, when a wave of the Black Death swept through the city and countryside, killing 80% of Siena's population. The half-completed walls remain the silent witnesses to Siena's ambition and the tragic events that befell the city.

During extensive renovation efforts in the 19th century, gold mosaics were also added to the cathedral's facade.

A little more history, and information about the cathedral treasures:

It is thought that the current cathedral took the place of an earlier church dedicated to Mary, erected around the 11th century on the site of an earlier temple dedicated to Minerva. Though not entirely documented, it also also thought that the building was consecrated in 1179 in the presence of pope Alessandro III Bandinelli from Siena, following the peace treaty signed with Holy Roman Emperor Frederick I, known as Barbarossa.

The Cathedral of Siena contains numerous masterpieces executed over the course of many centuries. Perhaps most exceptional is the magnificent marble intarsia floor. Giorgio Vasari called it "the most beautiful... largest and most magnificent... that ever was made.” Begun in the 14th century, it was only completed in the 18th century. The preparatory designs for the fifty-six panels were done by important painters and sculptors, all from Siena, except for Bernardino di Betto, known as Pinturicchio, who in 1505 authored the panel with the Hill of Wisdom. The techniques employed to transfer the ideas of the various artists onto the floor are marble intarsia and graffito. The procedure was initially quite simple, but gradually attained a surprising degree of detail: the first depictions were scratched onto slabs of white marble using a chisel, and were then filled with black stucco. This technique is known as "graffito". Later, colored marble was employed in much the same manner as wood inlaying. This technique is called "marble intarsia." Successively, the graffito and marble intarsia techniques were used together. Domenico Beccafumi, a Mannerist painter from Siena active in the first half of the 16th century, perfected this technique even further, obtaining effects of pictorial chiaroscuro (fine shadows and play of dark and light).

As for sculpture, the greatest sculptors of every epoch worked in the Cathedral of Siena. Nicola Pisano executed the pulpit from 1265 to 1268, his son Giovanni authored the sculptures on the facade. Donatello created the statue of John the Baptist situated in the chapel of the same name, Michelangelo sculpted Saint Peter and Saint Paul, Saint Pius and Saint Augustine for the Piccolomini altar, and the art of Gian Lorenzo Bernini is represented by the Mary Magdalene and Saint Jerome in the Cappella del Voto.

The Cathedral also contains works by other sculptors – such as Tino di Camaiano who executed the funerary monument to Cardinal Riccardo Petroni; Urbano da Cortona and Antonio Federighi who executed the splendid holy water stoups at the two pilasters of the nave and the little Easter Saturday well in the Baptist's Chapel. Further, Lorenzo di Pietro known as Vecchietta created the bronze tabernacle over the altar by Baldassarre Peruzzi; Giovanni di Stefano and Francesco di Giorgio Martini contributed to decorating the Duomo with the angel candelabra holders. Domenico Beccafumi authored the eight angels on the pillars near the high altar, Giuseppe Mazzuoli, Melchiorre Caffà, Antonio Raggi, and Pietro Balestra are the authors of the monuments dedicated to the popes.

Though the originals of many works are today preserved in the Museo dell'Opera, as well as in collections in Italy and abroad, the Cathedral of Siena continues to possess numerous original paintings – on wood, on canvas, and fresco cycles.

The Piccolomini Library contains the fresco cycle depicting the biography of Pius II executed by Pinturicchio between 1505 and 1507. The library also boasts the Ginori Floor that replaced the original with cobalt blue ornamental tiles with a golden half-moon, the group sculpture of the Three Graces, and an ancient Roman copy of a Hellenistic original. The display cabinets hold antiphonaries with miniatures by Sienese artists of the 15th century, as well as by Liberale da Verona and Girolamo da Cremona, who greatly influenced local Sienese painting during the second half of the 15th century.

In the Chapel of the Baptist, next to the Piccolomini Library, the Biography of Saint John the Baptist unfolds in a series of scenes painted by Pinturicchio, and in part reworked by Francesco Rustici and Cesare Maccari. Between 1503 and 1504, the painter from Umbria received the commission from then superintendent Alberto Aringhieri to decorate the chapel. The construction of the chapel had begun in 1482 to provide a place for the relic thought to be an arm of John the Baptist, which the Despot of Morea, Thomas Palaiologos, had gifted to Pius II who, in turn, donated it to the Cathedral of Siena. The fresco cycles also include work by Domenico Beccafumi who was commissioned to decorate the apse in 1535, and was assisted by a very young Marco Pino. Of this decoration remain the Glory of Angels in the conch, the two stucco victories on either side of it, and the two groups of Apostles.

In the area of the presbytery are four large frescoes by Sienese artist Ventura Salimbeni with his half-brother Francesco Vanni and Alessandro Casolani (1610). The scenes depict the Falling of the Manna, Esther and Ahasuerus, flanked by two paintings of saints and beatified Sienese.

Also of considerable interest is the series of the Cathedral's altarpieces, little known to the general public, but worthy of your attention, as they are representative of the 17th century. Some of them are by Carlo Maratta and Mattia Preti.

The Cathedral also has a series of extraordinary stained-glass windows. The most important of these is by Duccio di Buoninsegna and was once above the apse, but has recently been moved to the Museo dell'Opera and replaced with a copy. The oculus of the facade contains a stained-glass depiction of the Last Supper, executed in 1549 by Pastorino de' Pastorini, a student of Guillaume de Marcillat. Below in the middle, and supported by two putti, you will see the coat of arms of the rector who commissioned the work, Azzolino de' Cerretani, along with the artist's name and the date. Other stained-glass windows worth noting are by the workshop of Domenico Ghirlandaio in the Chapel of the Sacrament and in the Chapel of Saint Ansanus, and a series of twelve stained-glass windows along the drum of the dome, executed in 1886 by Ulisse de Matteis.

Finally, the choir is one of the best known works of the long and fertile artistic career of Fra Giovanni da Verona (1456-1525), an inlayer and wood-carver of considerable importance in the art history panorama of the 16th century. Thanks to his outstanding capabilities as faber lignarius (carpenter), the artist conceived magnificent objects and symbols connected with science and theology. The thirty-eight panels originally belonged to the choir of the Abbey of Monteoliveto Maggiore (1503-1505) but they were moved inside the Cathedral and inserted in the two wings of the original fourteenth-century choir by decision of the archbishop of Siena, Antonio Felice Zondadari, in 1813.

The marble floor is uncovered from the middle of August until end of October:

> Last admission half an hour before the Cathedral closes.

> Religious services may lead to changes in the opening times.