Visit Milan's welcoming place for "those who love beauty and look for truth, moved by goodwill"

Visit to the Ambrosiana: the Art Gallery, the Leonardo Room with the "Musician" and the "leonardeschi", and the Federiciana Room with the drawings from the Atlantic Code, the largest collection of Leonardo da Vinci's drawings and notes. 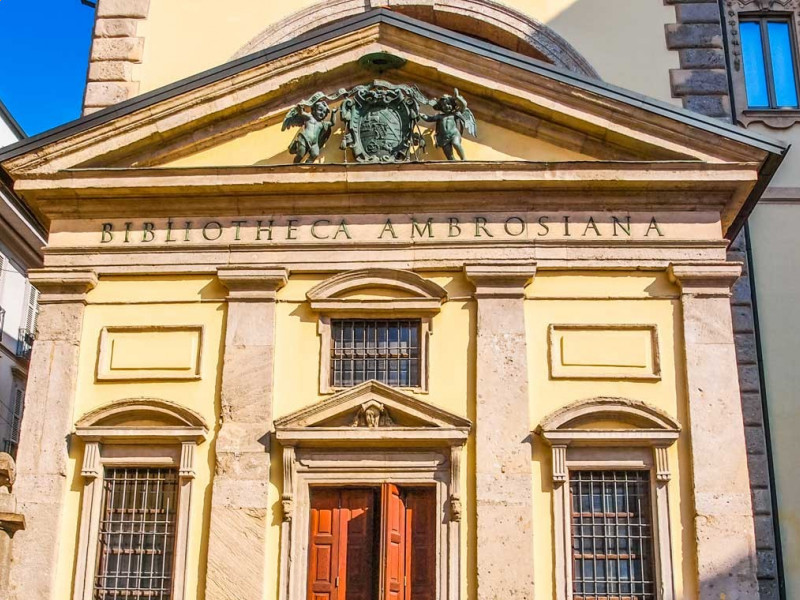 Visit the Art Gallery of the Ambrosiana Library with its masterpieces by great artists such as Raphael, Botticelli, Titian, and Caravaggio, and including the Leonardo Room with Leonardo da Vinci's Portrait of a Musician. See the original drawings of Leonardo da Vinci's Atlantic Code (Codex Atlanticus), the world’s largest and most breathtaking collection of the master's works.

Milan - Symbol of the Renaissance

Fifteenth century Milan became the European capital of art and culture thanks to the Visconti and Sforza families, and to Ludovico il Moro. Exceptional artists such as Bramante and Leonardo da Vinci visited Milan, which became the heart of Renaissance art.

The Ambrosiana Library, Art Gallery and Academy:
A welcoming place for those "who love beauty and look for truth, moved by goodwill".

The Library
With close to 700,000 prints, including thousands of incunabula,15,000 manuscripts - in addition to the famous Codex Atlanticus - the Ambrosiana Library has two of the 10 most important manuscripts in the world in Italian, Latin, Greek, Arabian, Syriac, Ethiopian, and other languages. The library’s collection includes 12,000 drawings by artists such as Raphael, Pisanello, and Leonardo, plus other rarities such as ancient maps, music manuscripts, parchments and papyrus. The Ambrosiana Library collection is one of the most important in the world.

The Art Gallery
Cardinal Federico Borromeo's 1618 donation of passionately collected works of art form the original core of the Art Gallery.  The Cardinal created the gallery to contribute to the training of young artists for whom Borromeo was preparing an Academy for painting, sculpture, and architecture.

But the collection, composed in part of religious art and partly of works portraying nature, reveals that the goal of the founder went further: Cardinal Borromeo was devoted to cultivating the public's enjoyment of beauty, considered a central element necessary for the human and Christian growth of the Milanese people.

The New Leonardo Room
A new room, the Ambrosiana Art Gallery, is entirely dedicated to Leonardo da Vinci. Leonardo's painting, Portrait of a Musician, as well as paintings by Leonardo’s followers are preserved at the Ambrosiana, in the room that currently hosts the Luini fresco. It was specially restored for this occasion by Professoressa Pinin Brambilla, the famous restorer of the Last Supper.

A forgotten Meeting: Bramante and Leonardo in Milan
The Veneranda Biblioteca Ambrosiana is proposing a special exhibition commemorating this almost forgotten meeting. The library does so with three goals in mind: to celebrate beauty, to recover a historic memory, and to reveal unknown masterpieces to the public.

You are not only invited to visit Leonardo da Vinci's masterpiece The Last Supper, but also to admire the drawings by the master and to experience the great collection of paintings and books of the Ambrosiana Library.

The Codex Atlanticus. Air, Water, Earth and Fire. History in Movement.
The Codex Atlanticus it is the largest and most breathtaking collection of papers by Leonardo da Vinci. The name comes from its impressive size, typical for an Atlas (650 x 440 mm). At the end of the 16th century, the sculptor Pompeo Leoni put the more than 1,700 texts and drawings by the master together in a large single volume of 402 pages. It was donated to the Biblioteca Ambrosiana together with 11 other manuscripts in 1637. Confiscated by Napoleon and taken to Paris, the Codex Atlanticus was later returned to its original home never to leave it again.

The collected material covers the whole intellectual life of Leonardo, spanning over 40 years, from 1478 to 1519. Represented here are: