Visit the Royal Palace, seat of the monarchy in Naples and of southern Italy for three centuries, without waiting in line!

Admire the Royal Palace without queueing up! When Naples is viewed from the sea one building in particular strikes the eye: the long pink and grey facade of the Royal Palace, decorated with the trellises of the hanging gardens on the first floor.

For those who see Naples from the sea, one building in particular strikes the eye: the long pink and grey facade of the Royal Palace, decorated with its spectacular hanging gardens
Before making your reservation, please, read the Ordering Informations

Open from Thursday to Tuesday from 9:00 to 20:00; closed on Wednesday, January 1st and December 25th. Cashier closes one hour before.

PLEASE NOTICE: Confirmed time is not always the same time you requested; museum automatically confirms the closest available time on the same date if requested time is sold out. 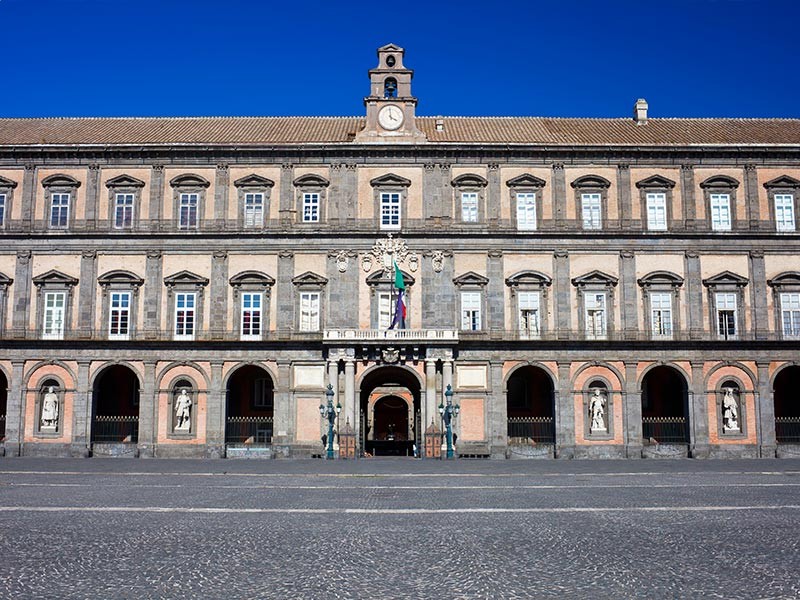 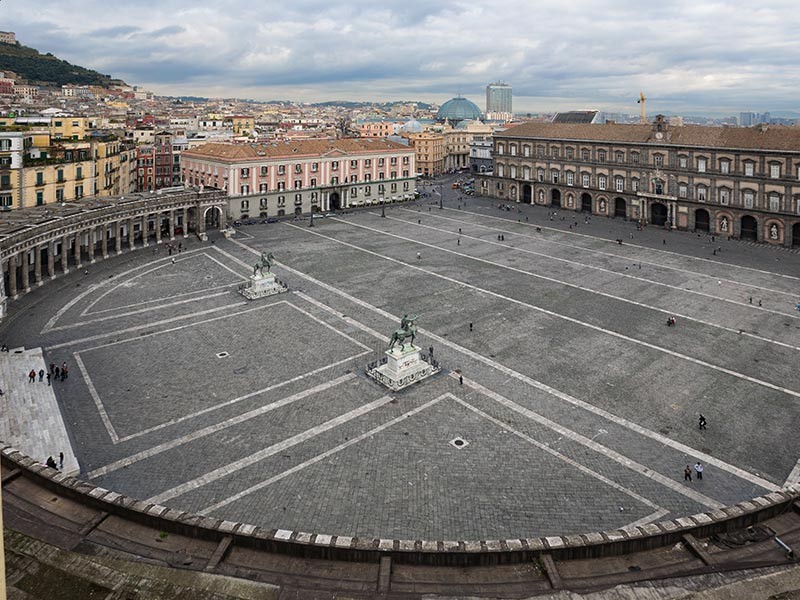 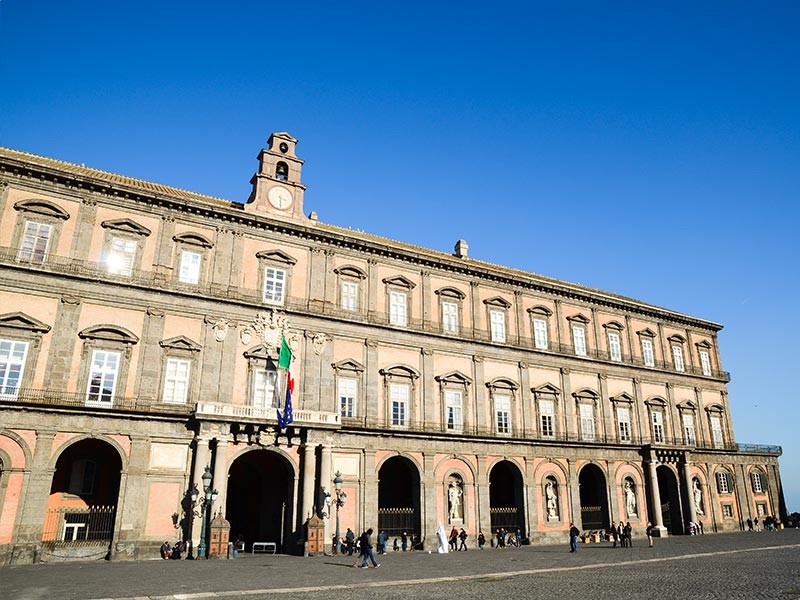 Open from Thursday to Tuesday from 9:00 to 20:00; closed on Wednesday, January 1st and December 25th. Cashier closes one hour before.

PLEASE NOTICE: Confirmed time is not always the same time you requested; museum automatically confirms the closest available time on the same date if requested time is sold out.

For those who see Naples from the sea, one building in particular strikes the eye: the long pink and grey facade of the Royal Palace, decorated with spectacular hanging gardens.

In the early 1600s, the Spanish Viceroys of Naples decided to build a modern residence for themselves and for when the King of Spain came to visit.  Its open colonnades and loggias were very different in design from the magical fortified castles of the Angevin and Aragonese kings.

The site chosen for the palace was next to the Castel Nuovo at the end of Via Toledo, towards the new residential area of Chiaia, south west of the original old city center. Even today, the palace square, or Piazza Plebiscito, is one of the State's administrative centers in Naples. The headquarters of the Military Command in Southern Italy and the Headquarters of the Provincial Authorities both have facades onto this square.

Viceroy Ferdinando Ruiz de Castro, Count of Lemos and the vicereine Caterina Zonica de Castro commissioned Domenico Fontana to design and build the palace according to a model dating from the late Renaissance. The architect had already experimented with this model in Rome in the work commissioned by Pope Sixtus V.

The facade was built in brick and black Piperno stone. Its size reflects the manneristic tendencies of the time, while its decorative style is reminiscent of ancient Roman buildings, with its granite columns, Latin inscriptions, Doric, Ionic and Corinthian pediments and pilaster strips.

The inside of the palace is laid out around the square courtyard of honor, which in turn is surrounded by a colonnade of Piperno stone arches. Above this colonnade there is a loggia, a covered arcade linking up all the rooms. Already present in Fontana's original design, and also included in the subsequent extensions by Sanfelice, Vanvitelli, Fuga, and Gaetano Genovese, two other rectangular courtyards, the Belvedere Courtyard and the Coaches Courtyard, communicate with the courtyard of honor.  These create an interesting visual effect seemingly extending into the infinite, with aligned porches and repeating architectural features.

To the north lies the picturesque garden designed by the botanist Denhart in 1841 and built during the major restoration works that the Palace underwent in the 19th century. The various shades of green created by magnolias, holm oaks, and rare plants form a contrast with the more recently added, exotic palm trees.

The garden and the whole north-east face of the Palace with the Royal Theater of San Carlo and the stables are surrounded by 19th century iron railing. The entrance to the old riding ground is dominated by the iron sculptures of two "horse trainers" by Clodt von Jurgenburg, a gift to King Ferdinand II of Bourbon from the Tzar of Russia in 1846. These sculptures form a link to St. Petersburg, as they are replicas of two sculptures on a bridge over the river Neva.

The esplanade facing towards Mount Vesuvius is connected to the bastions of the Maschio Angioino castle by an arched bridge built by the Viceroys, and recalls the old link between the Palace and the Fortress with its artillery arsenal.

In its early days of production, the Bourbon porcelain factory was located in a nearby pavilion. The entire Palace used to buzz with activities related to court life - such as the Royal Print Works, the Royal Tapestry Factory, which was later transferred to San Carlo alle Mortelle, the 17th century Palatine Academy, the Royal Chapel, the Court Upholsterers, the Military Guard, the Head Butler's rooms, and the staff quarters.

The Royal Palace was the seat of the monarchy in Naples and Southern Italy for three centuries, from 1600 to 1946 - beginning with the early Spanish and Austrian Viceroys, followed by the Bourbon Kings and ending with the Savoy royal family. The Royal Palace has housed the Museum of the State Apartments and the National Library since 1919 and has thus taken on a different cultural role in city life.