According to the tradition, the early Basilica, which was the oldest Florentine Cathedral, was consecrated by St. Ambrogio in 393 and was dedicated to the martyr Lorenzo (Saint Lawrence). The imposing Basilica we see today is the result of the radical renovation started in 1418 by Giovanni di Bicci, founder of the Medici's family.

Admission ticket to the Basilica of Saint Lawrence.

Entrance for visitors from the facade - left side door.

Rules for the visit:

It is not allowed to take photographs or video inside the monumental parts without prior authorization, upon written request and payment of the rights, to be forwarded to the OML office. The request must indicate the reason (study or commercial) and a copy of any photo, film or publication they are used for must be send to OML.

IMPORTANT NOTICE: After succesfully completing a reservation, you will receive two e- mails: the copy of your order (immediately after submitting your order) and the confirmation mail (one working day after). In order to receive them, please make sure you insert your e-mail address correctly and check that your anti-spam filter or antivirus are not blocking mails from our address [email protected] Special attention for AOL mailbox users.

Cancellation Policy:
For cancellations once a confirmation code has been assigned to the reservation, and for no shows, we can refund cost of unused tickets minus service fee (reservation fee and online booking fee).

Visitors are asked to respect some simple rules. Your pre-purchased ticket DOES NOT guarantee access or the possibility to stay inside the monument. You may be asked to leave if you choose not to respect the following:

Please note that the various places of worship may always be subject to closure without notice for masses, concerts, and extraordinary events. 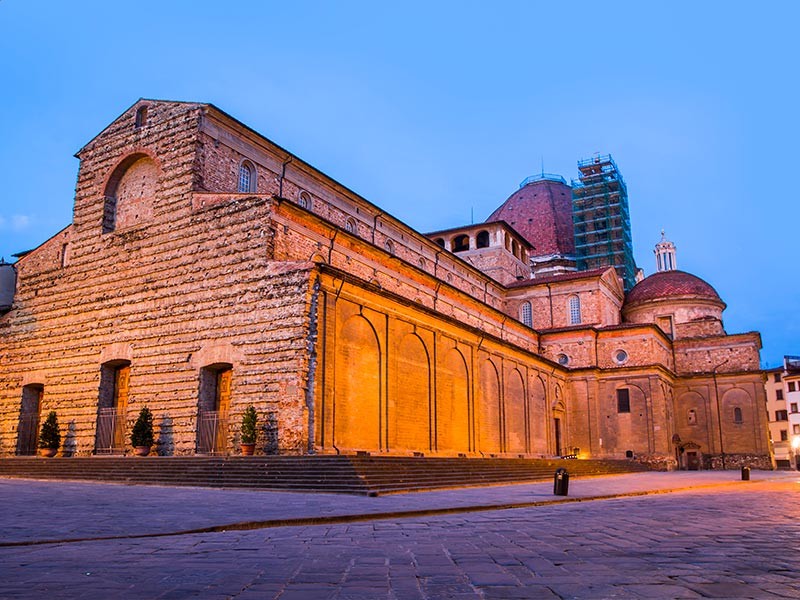 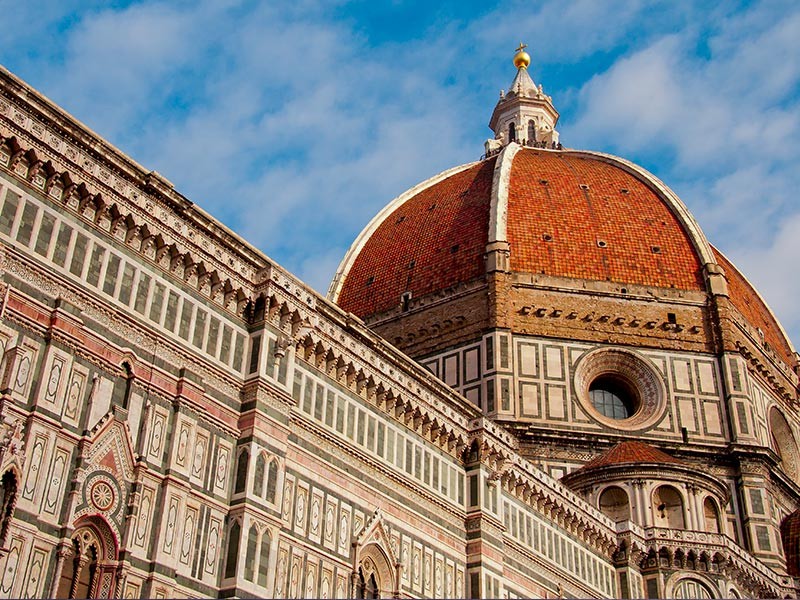 Venture into the Basilica of San Lorenzo, the city's first cathedral, elegantly remodeled by Brunelleschi. Once parish church of the Medici, it contains magnificent works of art and architecture.

Visitors are asked to respect some simple rules. Your pre-purchased ticket DOES NOT guarantee access or the possibility to stay inside the monument. You may be asked to leave if you choose not to respect the following:

Please note that the various places of worship may always be subject to closure without notice for masses, concerts, and extraordinary events.

The Basilica of San Lorenzo with Multimedia Guide

The Basilica
In the heart of bustling modern-day Florence, surrounded by markets and the teeming life of the city, stands San Lorenzo where an earlier church had been consecrated by Saint Ambrose, bishop of Milan, in 393. Dedicated to the early Christian martyr San Lorenzo (Lawrence), the original Basilica was then outside the city walls. It was Florence's first cathedral.

Giovanni dei Bicci, founder of the Medici dynasty, entrusted Filippo Brunelleschi with the reconstruction of San Lorenzo in the place of the much older church in 1419. Brunelleschi directed the works until his death in 1446.

The project was completed by his biographer and heir Antonio Manetti in 1461. Despite some interventions during the 18th century, the Basilica of San Lorenzo still retains the melodic vastness and the sense of harmony that Brunelleschi had wanted to infuse it with, true to the Renaissance architecture virtues of precise proportional relationships that regulate his structures.

It was the will of Pope Leo X (son of Lorenzo the Magnificent) to have the Basilica properly completed by a marble facade. In 1518, the Pope commissioned Michelangelo with the task. Many designs and a wooden model, now exposed in the museum of Casa Buonarroti, give an idea of the magnitude of Michelangelo's project, which was never realized.

The Old Sacristy
Built by Brunelleschi between 1422 and 1428, the old Sacristy represents one of the first projects by the famous Florentine architect in which he successfully transmitted his architectural vision into geometric volumes scrupulously subdivided in accordance with precise proportional ratios. The simplicity and stringency of the spatial concept (a cubic space covered by an umbrella dome divided into twelve segments) is emphasized by the use of Florentine stone (pietra serena) to highlight the load-bearing elements.

Brunelleschi's limpid architecture is offset by the polychrome stucco work produced by Donatello at various times between 1428 and 1443.

The harmonious fusion between architectural space and sculptural decoration makes the Old Sacristy one of the most complete and consistent works of the early Florentine Renaissance.

San Lorenzo's Treasure
The recently restored space in the crypt of the Basilica, which was once the headquarters of the Compagnia del Santissimo Sacramento, now houses the beginnings of the San Lorenzo's Treasure Museum. Rich altar decorations, vessels for liturgical celebrations, and the Basilica's precious reliquaries collected over the centuries are exhibited here.

The Cloisters
The main cloister of the Basilica is named after the Canons of San Lorenzo who have been in charge of ensuring the daily liturgy and care of the parish since the founding of the church.

Its current appearance is due to Antonio Manetti, Brunelleschi's pupil and successor, who renovated it between 1457 and 1462, probably based on an earlier design by Michelozzo, trusted architect of Cosimo the Elder.

Large and harmoniously structured, the cloister is divided into two tiers supported by elegant Ionic columns. The lower loggia is higher, airy, and has round arches, while the upper level is shorter and replaces the arches with a simpler architrave.

All around, the apartments of the canons and the prior, as well as spaces devoted to the common life, such as the kitchen, the refectory and the chapter room once faced the cloister courtyard. Letters of the alphabet above the doors, indicating the use of each room, are still visible today.

The smaller cloister, probably dating from the late 14th century, is the oldest part of the monumental complex, the only one that has retained the character of the building before Brunelleschi's renovations.

The Art of Michelangelo Buonarroti

The princely splendor of the women of the Medici family