Discover Imperial Rome with your private, expert guide who will take you deeper into Rome's fascinating imperial past.

We invite you to discover with us Rome and its treasures. Our itinerary includes Piazza del Campidoglio, the Roman Forum, the Colisseum and the Constantine Arch. 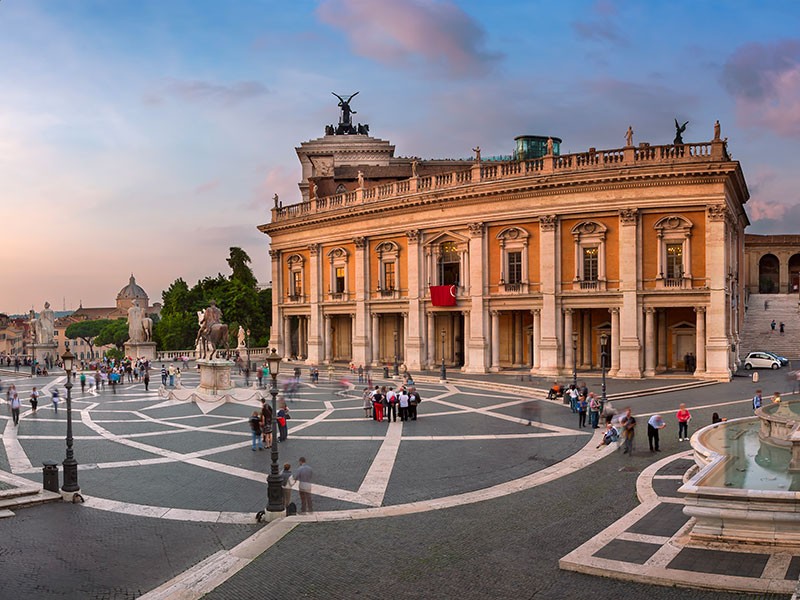 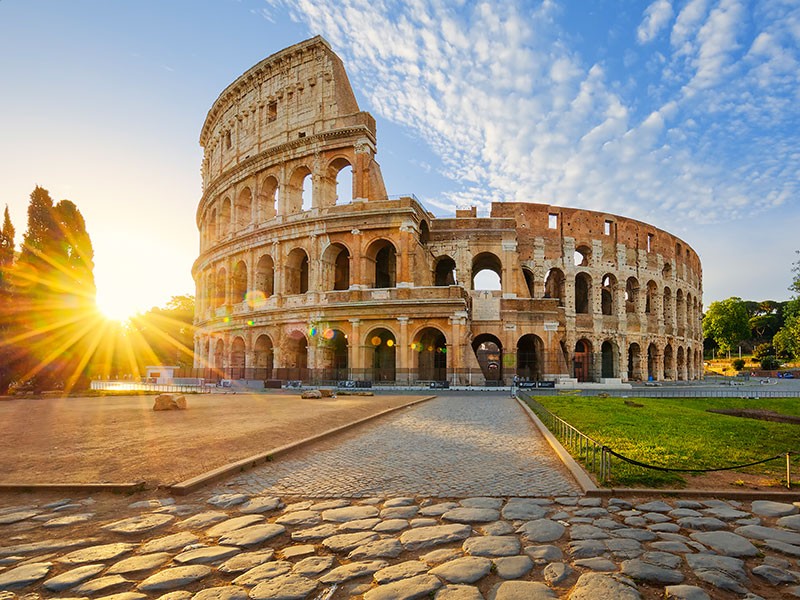 Legend has it that when Emperor Charles V visited Rome in 1536, Pope Paul III, a Farnese, was so embarrassed by the muddy state of the Capitol that he asked Michelangelo to draw up plans for repaving the piazza, and for renovating the façades of the Palazzo dei Conservatori and Palazzo Senatorio.

Michelangelo proposed adding the Palazzo Nuovo to form a piazza in the shape of a trapezium, embellishing it with classical sculptures chosen for their relevance to Rome. Building started in 1546 but progressed so slowly that Michelangelo only lived to oversee the construction of the double flight of steps at the entrance of Palazzo Senatorio. The piazza was completed in the 17th century, mostly following Michelangelo's original design. The monumental pilasters two storeys high and the balustrades interspersed with statues link the buildings thematically. The piazza faces west towards Saint Peter's, with a replica of a statue of Marcus Aurelius at its center. The original is in the Palazzo Nuovo.

The Forum was the center of political, commercial, and judicial life in ancient Rome. The largest buildings were the basilicas, where legal affairs were addressed. According to the playwright Plautus, the area teemed with "lawyers and litigants, bankers and brokers, shopkeepers and strumpets, good-for-nothings waiting for a tip from the rich.”

As Rome's population boomed, the forum became too small. Julius Caesar built a new one in 46 BC, setting a precedent that was followed by emperors from Augustus to Trajan. As well as the Imperial Forum, emperors also erected triumphal arches to themselves, and just to the east Vespasian built the Roman's entertainment center, the Colosseum. The valley of the Forum followed the course of a stream by the name of Velabrum, which had eroded the bank of volcanic tufa meandering between the Palatine and Capitoline hills toward the Tiber.

Forum was the name the Romans gave to the central square of the urban settlement – this busy, crowded place was in many ways similar to the pulsing center of a modern city. Here the masses would flock to see the meetings of the orators, attend criminal trials, and discuss internal politics or the latest military campaigns, or quite simply to comment on the games or run races (an activity the Romans particularly enjoyed).

The area around the Forum was also home to markets, shops, and taverns. You could also find the typical Thermopolia, the ancient equivalent of today's fast food restaurants. In short, the Forum was the heart and soul of city life.

It was in Caesar's time, when Rome became the capital, that the Forum became a place for celebrations, and Rome became the symbol of the vast Empire. A breathtaking panoramic view of the entire Forum complex awaits you from the magnificent terraces of Campidoglio. From here you see the imposing ruins of the Basilica Emilia – the only remaining republican basilica – as well as the Curia, which was once the seat of the Senate. Nearby you will also note a vine, a fig tree, and an olive tree – three trees cited by Pliny the Elder and replanted in recent times.

The Colosseum's real name is Flavius amphitheatre – but why does the world call it “Colosseum”? Perhaps the name was taken from the enormous statue of the Emperor Nero, the 35 meters/115 feet high colossus, which once stood next to the amphitheatre but has been completely destroyed.

Like modern sports stadiums, the Colosseum gave spectators efficient protection from the sun thanks to its ingenious roof covering, the "Velarium". The Velarium was an enormous linen tarpaulin hung by a system of ropes, winches, and wooden poles that girded the top of the outer wall. It took one hundred sailors from the imperial fleet to move it in perfect synchrony to the beating of a drum.

Following the Empire's decline, the Colosseum fell into disuse after the 6th century. Its walls subsequently housed confraternities, hospitals, hermits, and even a cemetery. From the Middle Ages onwards, the Colosseum has been one of Rome's and the world's greatest sites – today it attracts over 4 million visitors per year!

The Triumphal Arch was dedicated in 315 AD to celebrate Constantine's 312AD victory over his co-emperor, Maxentius. Constantine claimed he owed his victory to a vision of Christ, but there is nothing Christian about the arch – in fact, most of the medallions, reliefs, and statues were scavenged from earlier monuments. There are statues of Dacian prisoners taken from Trajan's Forum and reliefs of Marcus Aurelius, including one where he distributes bread to the poor. Inside the arch are reliefs of Trajan's victory over the Dacians. These were probably created by the artist who also worked on Trajan's column.